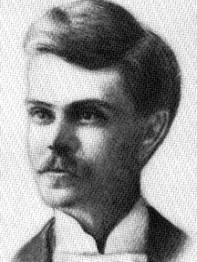 A. D. Taylor, "the Wonder of the Penmanship World," was born near Somonauk, Illinois on August 21, 1863. His first writing lessons were from H. H. Miller, a traveling writing teacher. While still in his teens, he won the prize (a year's subscription to The Business Journal, an early penmanship magazine) for the greatest improvement in penmanship within one year's period. In 1883 he took a commercial course at Elliott's Business College in Burlington, Iowa, studying penmanship from noted penman IW Pierson. In 1885 he studied with A. N. Palmer in Chicago for several months, and in August was employed as a penman by the Bryant & Stratton Business College of Chicago. After spending a year with this school he spent some time in New York, then in 1887 he traveled again, accepting a penman's position at the Los Angeles, California Business College. He remained there for 2 years, afterwards accepting a job with Mr. Elliott once more, returning to Burlington, Iowa for a 3 year period. During 1892 he was employed to fill out names on invitations for the World's Columbian Commission. He was next employed with the Chicago Guaranty Fund Life Society as a policy writer. in the mid 1890's he worked for the Galveston, Texas Business University, performing duties as penman and correspondent. Throughout his life, A. D. Taylor astounded the penmanship profession with his writing. He succumbed to tuberculosis at the age of 35 years. Despite his youth, he is remembered as one of the most highly skilled penmen of all time. His writing was phenomenal it was considered to be the finest and most perfect that could be performed by the human hand. Unlike the bold, dramatic style of Madarasz, A. D. Taylor's work was delicate and fine in detail, with a precision of spacing and letterform that was absolute. He died in San Antonio, Texas on December 27, 1898.