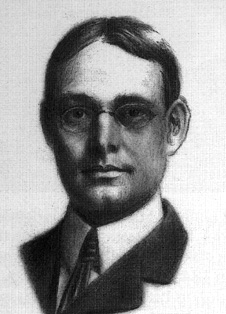 As Louis Madarasz was the acknowledged master of Ornamental Penmanship, E. C. Mills was the undisputed master of Business Writing. As Madarasz was first inspired by Gaskell's Compendium of Penmanship, so, too, was Mills.
At the age of fifteen, he entered the Denver Business College, where he was to address circulars, help with the business correspondence, and partake in a business course. After a couple of years, he traveled back to his home state of Illinois and taught school classes for five years. The Williams & Rogers Company in Rochester, New York hired him in 1896 to prepare script for their publications. Mills did this for several years, until the company was sold to the American Book Company.
After this, Mills decided to go into business for himself, and conducted numerous correspondence courses, performed commercial penmanship services and became the director of the penmanship programs of the parochial schools in Rochester, New York. He had many successful students, and several of these students later taught numerous students of their own. Some of the master penman who were considered to be either first or second generation students of Mills were Joseph J. Bailey, Alva Wonnell, and Paul O'Hara, among many others.
Mills constantly advertised his courses in The Business Educator and American Penman magazines, and in fifty years of service as a penman, he set the standards by which business writing was judged.