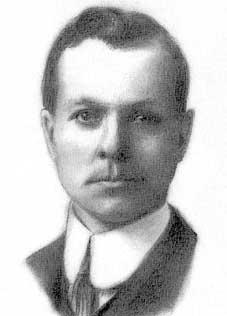 Born in Camden, Maine on March 25, 1869, Edwin L. Brown showed great interest in handwriting as a youth. In the unfilled pages of his grandfather's old account books, on any scrap of paper and on board fences he made crude drawings and flourishes. His first real inspiration and help came from GA Gaskell's Compendium of Penmanship, which he purchased with his first dollar. He entered Rockland Commercial College, Rockland, Maine, in 1887 After graduating a year later, he returned to the college to become a teacher. Under the training of H. A. Howard, he made rapid advancement in all styles of plain and ornamental penmanship. In 1888, he met A. R. Dunton, the famous author of the Duntonian System of Handwriting. Mr. Dunton was so well pleased with Brown's work and ability that he gave him instruction in more advanced penwork. Eventually, Dunton employed him to assist in engrossing the diplomas of the Boston Public Schools. During later years, he worked for a time at the Ames & Rollinson Engrossing Studio in New YorkCity, and traveled abroad in 1900 to study European art and design at the Paris Exposition. In his early days as an engrosser, he made large exhibition pieces, embracing all styles of plain and ornamental penmanship. Over the years, few artists in his profession produced the volume of work he did during his lifetime. The studio partnership E. L. Brown shared with his former instructor, H. A. Howard, began advertising in the Business Educator penmanship magazine in 1902. This successful business relationship was an enduring one, and ended at the death of Mr. Howard in November, 1952 at the age of 89. On January 8, 1958, Edwin L. Brown passed away in Rockland, Maine. During their years together, Howard & Brown built up a thriving engrossing and designing business that covered the entire United States and Canada.

03/09/2022
( Lesson )
External link: Learn Engrosser’s script (Copperplate) from EL Brown, one of the most versatile penman who ever lived. These are scans of lessons from an old American Penman magazine.
Read more >>