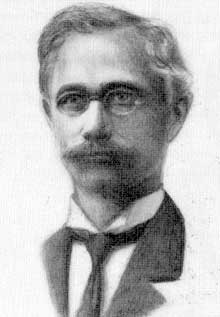 E. W. Bloser was born on November 6, 1865, and raised on his parents' farm in Pennsylvania. As a boy he made up writing inks and sold writing supplies to neighboring children who were interested in learning how to write. At age 17 he left home and entered the Sherman Telegraph School in Oberlin, Ohio. While he was studying telegraphy he became acquainted with G. W. Michael's Pen Art Hall. He entered Michael's school on August 2, 1883, and became so skilled that within a short period of time he assumed duties as a Penmanship instructor there. The school was relocated to Delaware, Ohio, and E. W. Bloser went along as well. In 1885, he made the acquaintance of Platt R. Spencer, Jr., who persuaded him to become one of the instructors at the Spencerian Business College in Cleveland, Ohio. Under Mr. Spencer's tutelage he made remarkable progress in his writing and acquired great skill and accuracy in body writing. In a few years he was considered the finest page writer in the penmanship profession. The following year, Bloser moved back to Delaware, Ohio to work for Mr. Michael. During part of that year, in 1886, C. P. Zaner also taught and worked in the school with Bloser. In 1891, Bloser purchased a third interest in the Zanerian Art College, the other two thirds belonging to C. P. Zaner (who founded the College in 1888) and Lloyd M. Kelchner, who was Zaner's cousin. Nearly a year later Kelchner left the company, and the name was changed to the Zanerian College, Zaner and Bloser Company, both partners having equal shares. After Zaner's untimely death in 1918, Bloser purchased Zaner's share and managed the business until his own death in 1929. A tireless worker and generous friend, he was referred to as a kind and gentleman and thought of with the highest regard by his colleagues. His penmanship was among the most precise, delicate and beautiful of all his peers. As a teacher he ranked with the finest. From the labors of his and Mr. Zaner's teaching, many of the best penmen of the early twentieth century received their start. He and Zaner were two of the most influential teachers of penmanship who ever lived.