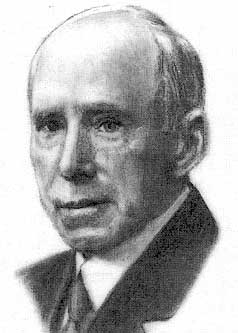 Known as "The Pen Wizard" by his peers, Francis B. Courtney was truly unique among penmen. As a student at age 17 of AH Hinman, the grand old master and student of PR Spencer, Courtney developed his passion for penmanship early in life. Shortly thereafter, he received further training in penmanship at the Spencerian Business College, Cleveland, Ohio.
His first position after graduation was as an accountant in a manufacturing company, which he held for two years. However, preferring to work in a business college environment rather than in a general office, Courtney wrote 200 single page specimens, each line being in a different style, and sent them out to business colleges throughout the country This brought him many job offers, and his reputation as a penman grew rapidly. Over the years, he taught at many such colleges: Hinman's College, Worcester, Massachusetts; Portland, Maine Business College; Lincoln, Nebraska Business College; Spaulding's Commercial College, Kansas City, Missouri; McDonald Business College, Des Moines, Iowa;
Caton's Commercial College, Minneapolis, Minnesota; Wood's School of Business, New York; Cedar Rapids Business College, Cedar Rapids, Iowa; and Toland's Business University He was one of the most consistent contributors to the Penman's Art Journal, the American Penman and the Business Educator, and was very prolific in his personal correspondence with his friends and colleagues.
No other penman was so versatile in various writing styles as Francis B. Courtney. He was most flamboyant in the penmanship demonstrations he gave, and he exhibited his prowess with the pen often. He seemed to revel in dashing out exotic and novel forms of decorative writing, a number of which were of his own creation. His Needlestitch script, Courtney's Backslanted script, Figure Writing, and Letterheads became trademarks for this great penman. Throughout his long life, he was an avid teacher, and influenced many young writers with his flawless work. He died at 85 years of age in 1952.