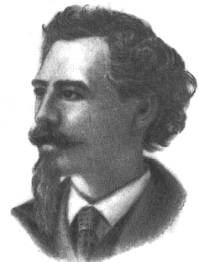 One of the greatest offhand flourishing artists of the era was Fielding Schofield. He had his peers in William E. Dennis, Clinton H. Clark, and John Williams, but none were better. He was born at Poughkeepsie, New York on January 17, 1845. It appears that Fielding inherited his artistic nature from his father, who by profession was a designer of patterns for carpets and tapestries. Fielding Schofield spent his youth working at various jobs: newsboy, errand boy, and a worker in a chair factory. In his later teens, he secured a janitor's position at the famous penmanship and business institution, Eastman College. By diligent work, study and practice, he was promoted quickly to advertising agent for the college, then assistant secretary, correspondent, and finally, instructor in penmanship. At age 21 he moved to Chicago to work with H. B. Bryant, staying for 2 years. He returned east in 1867 and worked in business education for 10 years at Warner's Polytechnic Institute in Providence, Rhode Island. In 1877, he moved once again, this time to Newark, New Jersey, where he taught penmanship for 5 years at the Coleman School. The year 1883 found Schofield joining his former classmate, D. L. Musselman, at the Gem City Business College in Quincy, Illinois. Here he was to remain for eight seasons, and it was during this portion of his life that Fielding Schofield reached the pinnacle of his skill as a penman. From 1883 to 1890 no one in the ranks of penmen surpassed him in skill or ability to produce original designs. In 1891 he joined Mr. E. P Herald in San Francisco. Shortly thereafter he moved back to the East. He did some teaching, first in Utica, New York for three years, and then in several evening schools in Boston. His health began to fail in his retirement years, and he passed away at the age of 79, an undisputed master of the pen.