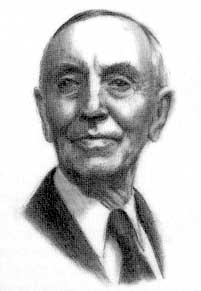 One of the foremost penmen and offhand flourishers of the early decades of this century, H. P. Behrensmeyer was widely respected by his peers. Born on February 18, 1868 near Quincy, Illinois, Mr. Behrensmeyer lived in Quincy all his life. As a boy, he attended the Salem Parochial School and the public schools, and as a young man entered the Gem City Business College. Here he studied penmanship under C. L. Martin, Fielding Schofield, and D. L. Musselman, Sr. His interest in penmanship began, however, when he was in his teens. He studied the art at night school, and practiced during spare moments while working as a clerk in a grocery store. After graduation from high school, Behrensmeyer wrote to Mr. Musselman (founder of the Gem City Business College), inquiring about what type of ink was best for writing. Shortly thereafter, he applied to the college and was accepted as a student. Within a few months time he had made so much progress in penmanship that Mr. Musselman began to take a special interest in him. He gave Behrensmeyer a job at the college as a clerk, in which capacity the young pupil served for two, years. During this time he was also given the responsibility of teaching penmanship. This work as a penmanship instructor began in September, 1886. Soon afterwards, he was placed in charge of the Penmanship Department, and continued in this role for over fifty years. Among all of his teachers, young Behrensmeyer was most influenced by Musselman and Schofield. As a teacher, Behrensmeyer was highly regarded, not only for his great skill as a penman, but also for his kind and honest character. Thousands of students came under his influence during his years at the Gem City Business College. Among those who achieved prominence were Charlton V. Howe and Chester Cook. Behrensmeyer's ornamental penmanship was especially delicate in nature, but his flourished birds and swans were exceptional in design and gracefulness. He died at the age of 80 on April 24, 1948 in Quincy, Illinois.

03/17/2022
( Lesson )
The first image shows work from H.P. Behrensmeyer at the age of 17, date 1885. Compared with his later work, at the pinnacle of his pen prowess, the refinements and skill have yet to be developed. The last image was penned in 1935, 50 years after the first. Notice the graceful refinement clearly evident.
Read more >>