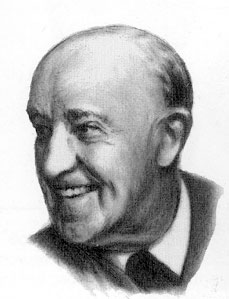 J. J. Bailey, Canada's most well known penman, was Edward C. Mills' foremost student, and except for Mills, Bailey was unsurpassed by anyone in plain, rapid, business penmanship. After graduating from the Zanerian College of Penmanship in 1910, he became associated with both elementary and high school systems in the teaching of penmanship. He was author of The Bailey Method of Penmanship that was used in the high schools throughout Ontario, Alberta and Saskatchewan for over 40 years. He also wrote 3 textbooks and a teachers' manual for use in elementary schools. One of the founding members of the International Association of Master Penmen, Engrossers and Teachers of Handwriting, J. J. Bailey was also an Honorary President of the Ontario Penmanship Association. A dedicated teacher, he significantly influenced the education of handwriting in Canada during the first half of the twentieth century. Among his many students were Frederick and Eileen Richardson.
The following was taken from The Pen Man’s Newsletter, Vol 4 Number 3 (1970)
From Eileen Richardson, Editor
Dear Friends of Good Penmanship:
This issue is dedicated to the memory of Canada's foremost penman, J. J. Bailey and his lovely wife, Mary. Mary Banks Bailey died on July 30, 1970 and J. J. died on October 21, 1970. He would have been 91 on November 24. Besides being an expert penman, J. J. was a master of English and a champion rose grower. He was author of a textbook "The Bailey Method of Penmanship" which has been used in the high schools of Ontario for over 40 years. He also wrote 3 textbooks for use in elementary schools as well as a teacher’s manual. His texts were also used in the provinces of Alberta and Saskatchewan. The script in the Bailey Method is unsurpassed for high school and more advanced students. E. C. Mills, his teacher, said, "No one ever wrote ten finer pages than those written by J. J. Bailey which were published in the Business Educator in 1929-1930. These pages have been reproduced here for your information, enjoyment and inspiration.
Mary Banks Bailey was a teacher in Toronto. At that time, every elementary teacher in the city of Toronto had to attend night school and take Penmanship from J. J. Bailey before being granted a permanent certificate to teach. This is how they met. J. J. taught night school to Toronto teachers for 30 years in addition to teaching Penmanship at the High School of Commerce during the day. As a result, the handwriting of the Toronto children was excellent. For example, Alan Richardson attended elementary school in Toronto and when the family moved to Aurora, the teacher was so impressed by Alan's handwriting that she went to Toronto to find out how to do it.
The Baileys were both generous, hospitable people. In going through some of the correspondence from them, it is interesting to note that they always said, "Come and see us." We often did. The picture of the Baileys on the ''In Memoriam" page was taken from a group picture of our wedding party, December 15, 1945. My husband, Fred, Jean Boyes and I were his favorite students, Fred being his best one.
==============================================
From Fred Richardson
J. J. Bailey, Canada's foremost penman, was one of a group of seven who founded the International Association of Master Penmen and Teachers of Handwriting. He was one of the founders of the Ontario Secondary School Teachers' Federation and one of the founders of the Teachers Superannuation.
As a teacher, he was tops. Tops too as a penman. In all the world he was unsurpassed in plain, rapid, business penmanship. He was E. C. Mills’ foremost student. When he went to Columbus, Ohio in 1910 to attend the Zanerian College of Penmanship, Mr. C. P. Zaner, the greatest all-round penman in the world, told him that he couldn't show him anything better than his own (J.J.'s) plain, rapid script. His "Bailey Method of Penmanship" is superb for a business college, high school and adult use. His best work was probably done in 1925 after a summer spent in building a stone wall at his sister's cottage on Lake Simcoe where he worked alone and had to lift and place stones of up to 250 pounds. He designed the "Bailey Transparent Form Chart" made of transparent plastic with the letters and figures stamped on it in black, He was an excellent ornamental penman as well.
Few people could match him in wit. He and H. J. Walter kept us all in stitches during the whole week of our first convention. He was Hon. President of the Ontario Penmanship Association when it was an active part of the Ontario Education Association Commercial Section at the Easter meetings. J.J. like so many of the master penmen, liked motoring. In the early 1920's, he drove 25, 000 miles a year.

Milestones on the Penmanship Highway