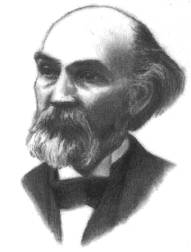 A biographical sketch of Lyman P. Spencer's life is detailed earlier in this chapter. in brief, he was without question the most artistic of the Spencer children, and the finest penman among his siblings. Born in 1840, he displayed an ability at drawing and illustration during his youth that surpassed many of his elders. While in his twenties he served in the Civil War, after which he devoted his career to developing and promoting the Spencerian publications. In 1876 Lyman Spencer and Henry Flickinger produced a masterwork of the Declaration of Independence for the Centennial Exhibition of the United States. Both men were considered to be the finest penmen of their age, with flawless skill in the execution of letterform and flourish. Together, these artists penned the original specimens for the New Spencerian Compendium of Penmanship (1879), the finest book of penmanship at that time From an historic perspective, Lyman P. Spencer's efforts were noteworthy not only for his facility with a pen, but perhaps more importantly because it was he who served as a vital link between his father, Platt Rogers Spencer, and the most productive generation of American penmen. Through his work with the Compendium, the other Spencer publications and his professional associations with other penmen, the guiding principles and philosophy of the Spencerian System of Penmanship continued to influence the style of American handwriting well into the twentieth century. Lyman Spencer lived to his seventy sixth year, and passed away on June 11, 1915.