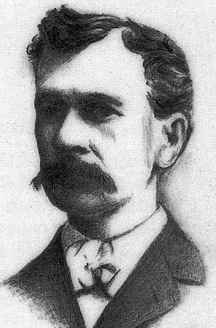 Among the ranks of penmen, there were few indeed who earned the respect and admiration of his peers to a greater degree than William E. Dennis. As a man beloved by the members of his profession, he rates with E. W. Bloser, C. P. Zaner and even P. R. Spencer. As a skilled penman in every field of penmanship and pen art, he ranked above them all. In the eyes of his contemporaries and those penmen who followed after his death, he was often regarded as the finest all around penman who ever lived. To this day, his work remains unchallenged and undoubtedly will remain so. Born in Manchester, New Hampshire in 1860, Dennis' interest in penmanship started in 1875 at the age of 15 when he secured a copy of Gaskell's Compendium of Penmanship. He studied the plates in the text and sent his lessons to Gaskell for critique. Two years later he enrolled in Gaskell's school and was widely promoted by the great penman as "Gaskell's boy wonder" It was at that institution where Dennis made friends with his new classmate A. N. Palmer, a treasured association that lasted through both men's lifetimes. While a young man in his twenties, Dennis tried several lines of work as a clerk, but found them too boring for his taste. He decorated the ledger books in his charge with fancy birds and scrolls, but it seems that this did little to impress his employers, for he was fired from no less than three jobs! His fortunes changed and his career path became guided when shortly thereafter he met A. R. Dunton one of the most skilled penmen of the 19th century. Under Dunton's guidance, Dennis learned much practical use for his pen, as well as many advanced techniques of penmanship. During his career as a penman and engrosser, W. E. Dennis was known as an expert of the highest caliber in all forms of ornamental penmanship, shaded "display" scripts, and text lettering. He was considered a genius at offhand flourishing, and was acclaimed as "America's Dean of Engrossing." In 1909 he met Mr. Willis Baird, and in 1914 the two men formed a partnership in Brooklyn, New York. It was also in that same year that the American Penman published a superb collection of ornamental penmanship by Dennis entitled "Studies In Pen Art," copies of which were eagerly sought by penmen of his day and are prized by collectors today For many years until his death, William E. Dennis maintained his studio in Brooklyn and produced work of superlative quality. His death at age 64 on June 6, 1924 was a shock to the penmanship profession. A slightly built man of 5'6" and 135 pounds, his passing resulted from pneumonia after an illness of only three days. Numerous Master Penmen eulogized him, but perhaps none better than his dear friend Samuel E. Bartow: "Dennis was to the penmanship profession what such painters as Whistler, Sargent and Da Vinci were to the art world. His book known as 'Studies in Pen Art' forms one of the most enduring monuments to that Greatest of Great all around penman, W E. Dennis."