In this installment we will examination the last group of lower case letterforms (Figure 1). You will notice that the letters ‘z’ and ‘p’ are separated from the grouping of letters ‘b’, ‘h’ and ‘y’. This was done because the ‘z’ and the ‘p’ are special cases.

External link: Learn Engrosser’s script (Copperplate) from EL Brown, one of the most versatile penman who ever lived. These are scans of lessons from an old American Penman magazine.

Are you struggling with the pointed pen and trying to learn Copperplate? Then these images are for you. The images show two specimens illustrating Dr. Vitolo's progress. The first was penned while he was a novice in August 1999, just prior to attending his first IAMPETH convention. The last was penned in February 2003. The differences clearly show there is hope for anyone willing to put forth the effort to learn script. 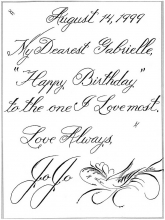 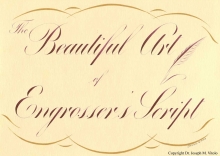